My first interaction was with 3 kids who had reached early for the Data Science Camp. One of them had a vague idea that, “Data Science is somehow related to Big Data, which gets accumulated in many companies and the companies try to run some algorithm so that they can see some pattern from the data.”, which was very interesting to hear as it shows that even the kids from 8th standard have heard that there is something as ‘Big Data’, ‘Data Science’ which is helping big companies make decisions and look at patterns.

The kids included kids from 6th standard to 10th standard. In order to engage them, in the starting we started a video which showed how to do basic programming in Scratch (a kid’s programming software developed by MIT Media Lab). It was again interesting to see that kids from 6th standard were already familiar with Scratch and they liked it as they were seeing a visual actor which was acting according to their script’s commands. So after an ice-breaking session the kids were broken down into pairs and each pair was assigned a mentor to help them with the further exercises and data visualization.

I was assigned to a group which had alpha, studying in 6th standard and the most hyperactive
kid in the camp, and beta, who had just entered the college and came to camp to understand and get a head-start on data science. As part of the exercise they were given some sheets in which they could see a face of a kid with name and what he/she likes as a hobby and the kid had to decide whether he/she will befriend the shown kid or not. More on the experiment here.[todo-link]They were asked to rate how likely they are going to befriend him/her on the scale of 1-5 where 5 being the most likely that he/she will friend him. In about 15 minutes they were done with the exercise but they didn’t have any idea as why they are doing it. So after the exercise we collected them at one place to make them understand as why we had done the former exercise.

So the aim of the exercise was to see the pattern of the scoring by each kid and try to learn something about their personality via the data. After discussion the three features that we tried to select from the figures were the gender of the subject, how new and old name is of the subject and whether the subject likes an outdoor or an indoor activity. After gathering at one place all the kids randomly exchanged their sheets with some other kid. After that the kids had to fill all the entries in excel where they had to note down all the scores the other kid has given to different subjects. After data-entry came the exciting part of visualizing the data. The kids segregated the data into 5 bins.

The second column is the number of subjects who were marked according to the adjacent rubric. This was on another kid, Gamma. I asked them to infer something from the data on which they were not much sure what they can say about the other kid. The smaller kid though had one pattern which he saw while doing data-entry was that Gamma has given atleast made one friend on each page, things we don’t see but his little brain was already finding some patterns :D. But after that I asked them to make a bar graph for this data. 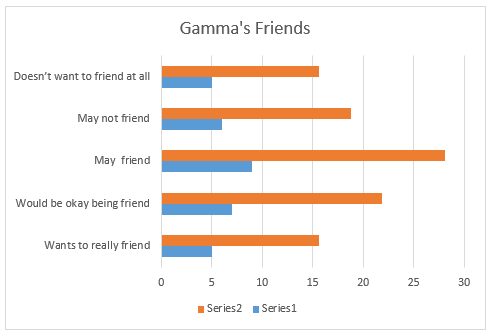 And again asked them to infer something where they were able to see that Gamma seemed to fairly indecisive and and that is why most of his rating lie in the range of 2-4, which is again interesting. After this they made some graphs of the male/female proportion, outdoor/indoor proportion etc.

After the whole exercises when asked upon what is the take-back from the whole camp, the reply from the smaller kid was that, “The chlorophyll (He meant Cholera :P todo.) example which was to explain data was great and also the visualization was good.” and by the other kid was, “I knew all these tools but it was exciting to see these tools can be used to do interesting stuff”.

All and all the whole experience of the camp was great, the learning experience was great to see the enthusiasm of the kids for data science and learning.