Why a data science camp? A bird's eye view of the day

Having just finished what was probably a first attempt at something of this sort in India (and across the world too, I guess), we ought to be patting ourselves on our backs for having done a decent job. We organized a “data camp” for kids from the 6th to 9th grades a couple of hours back. We had 15 students participating in the camp, who didn’t quite have an idea of what to expect out of it. Furthermore, I had parents coming up to me fully surprised as to why Aspiring Minds would even be interested in something like this. And the answer to that was quite simple – because we believe in it. We believe that understanding data driven decision making would be an indispensable skill which would be expected of everyone in the years to come.  This is much like what’s happening with computer programming; knowing how to code today is not the lingua franca of just software engineers – a field of science simply can’t do without it today. We believe that this distinction would be taken up by the data sciences in the years to come. And to do something about this belief, we thought organizing this data camp would be a good first step and we’re quite glad we did :)

It was sheer fun – from understanding what kids find easy to grasp and what they don’t to gauging how they learn information not presented to them in the usual classroom format; was quite fascinating to see all this unfold before me. A couple of things that particularly caught my eye were (pardon me for a smiley excess in the notes that follow; it was a lot of fun and I’m visibly and mentally pleased about the whole experience) – 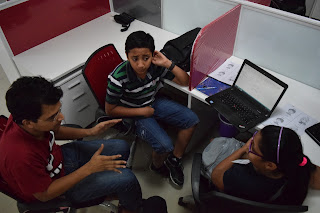 In all, it was a great way to spend the weekend. I definitely look forward to more of these. Great effort by some of the guys in our group – Harsh, Gursimran, Nishant in particular to seeing things through. A loud shout out to Varun for having been this ever so polite audience to my rants on pursuing such a camp and for suggesting that we actually go ahead with it for kids :)

Will want to see this grow and probably evolve into something far more intensive and meaningful for undergraduates and high school seniors. I’ll aim for the stars hoping to at least land on the moon. Until then.